Learning to Live with and Survive an Eating Disorder 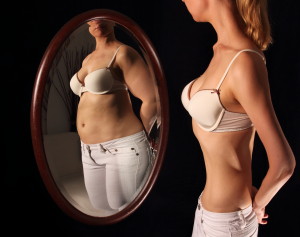 Learning to Live With and Survive An Eating Disorder
A true account of one woman’s experience with dealing with her eating disorder!

I was 18 years old when I first started to dislike my body. I had spent the past 6 months living on a kibbutz in Israel. My diet for those 6 months consisted of hard boiled eggs, cucumber, apricots and bread. I had always been a picky eater and a kibbutz canteen is not the place to eat if you are in the least bit squeamish about what you digest! It was hard to tell what most of the dishes were, even distinguishing between animal, mineral or vegetable was tricky! So true to past form I stuck to the foods that were safe in my mind!!

On arriving back in Manchester my father greeted me off the plane with these immortal words ”oh look at you with your little footballers legs” a seemingly innocuous throw away remark which to this day I can still hear reverberating around my conscious mind! That comment was the beginning of years of pain, obsession and a never ending quest for perfection! I was 18, a size 8 and had my whole life ahead of me yet somehow I believed I was not good enough and the only way to be better was to control what I put in my body and be thinner.

Although it was that comment that started my obsession with my weight I recognise now that there were other factors at play way before then that pre-disposed me towards having an eating disorder. I grew up in a middle class family in the leafy suburbs of Hale and Wilmslow. The emphasis was very much on achieving and bettering ones self. Talking about feelings was something that did not happen in my family. There were problems in my family just like there are problems in most peoples families. It was a case of toughen up and get on with it as its a hard world out there and talking about it was just not the done thing. I believe I was always over sensitive and responded in a negative way to any form of criticism. Unfortunately I often heard my parents attempt to push me further academically as a form of criticism rather than encouragement. My self esteem always felt low due to this. It is important to note here that I do not attach blame to my parents but acknowledge that it was a combination of family beliefs and my own struggles dealing with any difficult emotions that I believe lay me open to using food and weight to control my feelings.

I became obsessed with looking at images of models in magazines and began to judge and condemn myself for not being strong willed enough to be as thin as they were. It was at this point that I first started to purge. I was never particularly an over eater but each time I ate anything I felt weak willed and this in turn made me dislike myself further. If I made myself sick then I would feel slightly better about myself as I felt then that at least I had a bit of control over what I was keeping in my body. I have since learnt that bulimia is an addictive illness as there is something about the ritual of eating and purging that fits into the obsessive/compulsive nature of addiction.

‘ Addiction is a primary, chronic, neurobiologic disease, with genetic, psychosocial, and environmental factors. . . . It is characterized by behaviors that include one or more of the following: impaired control over drug use or addictive behaviour such as gambling shopping and eating disorders, compulsive use, continued use despite harm, and craving ‘(Savage et al., 2003).

When I look back I can clearly recognise how I felt I had no choice but to rid myself of the food I had eaten. I was locked into a cycle of obsessive thinking and compulsive behaviour patterns.

This behaviour continued into my early 20’s when I discovered that there were other ways of controlling my weight which did not include purging. The next few years of my life were characterised by drug use which I can now clearly see, through counselling, that I was using in order to control my weight. At the time I was only vaguely aware that the drugs I used kept my weight down, I was more inclined to think I was just doing the same as a lot of my friends, the only difference being I did not seem to have a ‘stop’ button. In the same way I had been locked into a cycle of binging and purging I was then caught up in the same obsessive compulsive pattern of behaviour with my drug use.

By the time I was 23 it was very clear to see that I was very poorly. My weight had plummeted to 6 and a half stone and my behaviours were erratic. It was at this point that I had my first psychological intervention. I saw a psychiatrist who recommended I enter into a detox facility to address my drug use. At this point I did not disclose that I had an eating disorder although my parents were aware that I would make myself sick every time I ate. The drug addiction seemed to be so much more the problem than the eating disorder that all the psychological help I had focused on that. Maybe if I had been more honest back then about my low self worth and insecurities I might have saved myself and others a lot of pain. As it was I continued to act out on my eating even though I was remaining abstinent from all mood altering chemicals. I had not addressed why I felt so much less than most other people.

This behaviour continued for another couple of years until I became pregnant with my first child. For the first time ever I knew I had to get honest with someone as I was afraid my purging was going to effect my unborn baby. I spoke to my obstetrician who suggested I speak to a counsellor about my relationship with food.

I entered into counselling and began to admit how much of my life had been consumed with my weight, my body image, thoughts of eating or not eating and how desperately I craved freedom from this obsessive way of thinking and behaving. The more I began to understand how much I disliked myself and how using food gave me some control in my life the more I became aware of what changes I needed to make. The first thing I needed to do was to start to like myself. To do this first of all I needed to forgive myself for my negative ways of behaving and to start practicing new behaviours that made me feel better about myself.

Through the help of counselling I learnt that I needed to take small steps towards improving my self worth. The first thing was to start talking honestly and openly about how I felt with people I trusted. It was suggested that I start attending groups where I could get identification with other people who had used food in the same way I had. This enabled me to feel less isolated with my problem and also to believe that I wasn’t a bad person but that in fact I was a sick person trying to get well. It was also suggested that I start exercising in a healthy moderate way. Yoga was very strongly advised due to the calming, meditative values it combines with keeping fit. Yoga became very dear to me and has continued to be an important part of my life even now 20 years later. I then had to learn how to eat foods that were healthy to my body. The more I practiced this the less desire I had to purge. After about a year of therapy and practicing healthy living combined with attending mutual aid groups I stopped purging.

I have continued to be free from purging for the past 20 years. That is not to say that I feel I am cured from my eating disorder. I believe I am in a recovery process that means I have to continue to take care of my physical, emotional and spiritual being at all times. There are times when this is easier than at others. I have suffered periods of relapse where my thinking pattern has again become obsessive around the food I put in my body and my body image. This is usually at times of high stress and invariably is when I am not talking to other people about how I feel. Counselling was always and continues to be a safe place for me to talk about my emotional difficulties without worrying those that are closest to me. Unfortunately those closest to me can be afraid that if I talk about my struggles too openly with them then I might be on a downward spiral. Therapy allows me to be really open and honest about my demons. It is my belief that you are never cured of an eating disorder but that you can learn to live a happy and fulfilled life without being obsessed with food and weight and also to loose the desire to act out on it in a compulsive and destructive way. It is all about discovering who you really are, accepting yourself and having the courage to take that journey that helps you learn to love yourself.

Are you struggling with an eating disorder, or are worried about somebody elses eating disorder? If you are and wish to speak to someone about entering into counselling to get help then you can contact me at victoriaabadi66@gmail.com or call me for a free 20 minute telephone consultation on 07983726647.

This entry was posted in Uncategorized. Bookmark the permalink.